More Bouts Are Announced For June 29th Card in Woodlawn! 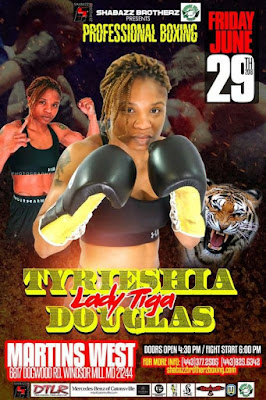 More bouts have been announced for the Shabazz Brothers card on Friday, June 29th at Martin's West in Woodlawn, MD.

The Rahman Family of Baltimore, MD will all be in action on this card.  Heavyweight Hasim "Gold Blooded" Rahman, Jr. will battle Steven Tyner of Albany NY by way of Cleveland, OH in a four-round contest.  Rahman, Jr. (4-0, three KO's) comes off a four-round majority decision win over Ronny Hale on February 10th in Philadelphia, PA.  Tyner (4-15-3, two KO's) won a four-round unanimous decision over Ryan Covert in May of 2017 in Butler, PA.

Younger brother Sharif "C3" Rahman will take on Tahlik Taylor of Freeport, NY in a four-round light heavyweight contest.  Rahman (2-0, two KO's) has scored first-round knockouts in his two bouts, including one over Curt Johnson on September 30th in Kansas City, KS.  Taylor (3-10-1, one KO) is unbeaten in his last two outings, getting a draw and a win.  Taylor battled Darren Goodall to a six-round draw in his last contest on May 4th in Whippany, NJ.

There will also be an appearance by former undisputed World Heavyweight champion Hasim Rahman, Sr.'s brother, Muhsin Cason who will battle the debuting Charles Johnson of Washington, DC in a four-round cruiserweight tilt.  Cason (1-0) made his pro debut on May 5th and won a four-round unanimous decision over Alexander Rosales Cruz in Peterborough, Ontario, Canada.  Johnson was a talented amateur from 2008-2010, winning a USA Boxing regional championship and participating in the local and regional Golden Gloves.

Also on the card will be Columbia, MD middleweight Ashton "The Goon" Sykes who will take on Alberto Delgado of Roanoke, VA in a four-round bout.  Sykes (1-1) looks to bounce back from dropping a four-round majority decision to Angel Martinez on December 8th in Tampa, FL.  Delgado (0-2-3) has battled to two draws in his last two contests against the same boxer, Tomas Williams.  The first took place on August 27th in Lynchburg, VA and the second was on November 30th at the MGM National Harbor Casino in Oxon Hill, MD.  Delgado's losses both came to Beltway Boxers -- Joey Veazey and Justin Hurd.

Baltimore, MD super featherweight Mack "Papi" Allison IV will be in a scheduled four-round contest against Rashad Bogar of Newark, NJ.  Allison (7-1-1, seven KO's) will look to bounce back from his six-round unanimous decision loss to Reggie Barnett on December 9th in Norfolk, VA.  Bogar (4-7-1, two KO's) has not fought since May of 2016 and looks to break a three-bout losing streak.

Light heavyweight Marvin Johnson of Baltimore will battle the debuting Travis "Holy" Toledo of the Bronx, NY in a four-rounder.  Johnson defeated the aforementioned Tahlik Taylor by first-round knockout in his pro debut on February 18th in Stone Mountain, GA.  Toledo is a well-known amateur in New York who participated numerous times in the New York Golden Gloves.

Middleweight Omar Kabary Salem of Brooklyn, NY will also be on the card in a four-round contest against Latiss Norman of Cleveland, OH.  Salem (2-0) won both of his bouts against the same boxer, Leon DeShields, by four-round unanimous decision.  Norman (1-1, one KO) bounced back from losing his pro debut in March to score a fourth-round TKO over Joshua Kuhn on May 25th in Pittsburgh, PA.