There will be a card tonight at the Sphinx Club in Northwest Washington, DC that will warrant a different type of preview than I normally give.  First, I apologize for the late notice of the card.  I actually was given the details of the card only yesterday afternoon.

After looking at the bout sheet, I started to understand why.

The positives out of the way first. Tonight's DC Fight Night Promotions card will feature the pro debut of three of the most accomplished amateurs to come out of the Beltway in many years.

Tyrek Irby of Oxon Hill, MD was the first local to qualify for the Olympic Trials at 141 pounds.  Irby participated in the World Series of Boxing, winning two bouts.

Tiara Brown of  Bladensburg, MD was a world amateur champion at 125 pounds and was a two-time participant in the Women's US Olympic Trials.

Malik Jackson of DC won medals in numerous tournaments in Poland and the Ukraine and is a former USA Nationals champion.

Unfortunately, the pro debuts may not be as memorable as hoped.  Seven of the nine bouts on the card -- including the three bouts for Irby, Brown and Jackson -- will match Beltway Boxers against boxers from Wilson, NC, a town where a North Carolina boxing blogger tabulated that boxers went 0 for the entire year of 2015.

Back in June of 2013, there was a similar card that took place at Echostage lounge in DC.  My normal thought pattern is not judge the card simply by what is written on paper.  However, the card was what I thought it would be -- a fiasco.

Three years later, I can't help but pre-judge now.  On this card, only one of the boxers from Wilson has a win,  two are winless and four are making pro debuts.

After the June 2013 card, the District Of Columbia Boxing And Wrestling Commission had banned boxers from Wilson from coming to DC.  Unfortunately,  the man who imposed the ban, Deputy Commissoner Alfred Grant, passed away in 2015.

I don't want you to avoid this card entirely -- there are some quality boxers on the A side of this event and you should support them.  However, history has proven that you should not expect much from their opponents.

With that, here is the card:

Four-Rounds - Super Featherweights - Renardo "Misunderstood" Gaines (7-2, one KO), District Heights, MD vs. Sean Lockhart (5-26-2, two KO's), Greenwood, SC.  Gaines has not fought since winning a six-round majority decision over Stephon McIntyre in July of 2015 at the Sphinx Club.  Lockhart last fought in January of 2015 at the Convention Center and was stopped by Harris in the first round.

Four-Rounds - Bantamweights - Mo Adams, Jr (1-1), Washington, DC vs. Isaiah Stubbs (Pro Debut), Wilson, NC.  This will be the first bout for Adams, Jr. since losing to Gabriel Braxton by third-round TKO in January of 2015 at the Washington Convention Center.

Four-Rounds - Middleweights - Philip Hooker (1-0, one KO) , Washington, DC vs.  Damian Archer (0-2), Wilson, NC.  Hooker made his pro debut on August 19 and scored a first-round TKO over David Rohn in Crystal City, VA.  Archer was stopped in the first round by Steve Weimer on June 4 in Springfield, VA.

First bell for the card is at 7 PM ET.
Posted by Gary Digital Williams at 11:39 AM No comments:

Alantez Fox tipped the scales at 163 1/2 for his nationally-televised eight-round co-feature bout against Ronald Montes tonight at the UIC Pavilion in Chicago, IL.  Montes weighed 162 pounds.

The bout will be shown on the CBS Sports Network.  The telecast begins at 9 PM ET.
Posted by Gary Digital Williams at 6:37 AM No comments:

Undefeated Forestville, MD middleweight Alantez "SlyAza" Fox returns to action in an eight-round contest against Ronald "Salvaje" Montes of Barranquilla, Colombia on Friday, September 30 at the UIC Pavilion in Chicago, IL.  The bout is the co-feature on the card and will be shown on the CBS Sports Network.

Fox (20-0-1, nine KO's) has stopped five of his last six opponents including a fifth-round stoppage of Paul Valenzuela on July 21 in Mashantucket, CT.  Montes (17-3, 15 KO's) broke a three-bout losing streak with a fourth-round knockout of Edinson Jimenez on June 18 in Barranquilla.

The telecast is scheduled to begin at 9 PM ET.
Posted by Gary Digital Williams at 9:43 PM No comments:

Stevenson Stopped In Third Round In Oklahoma!

Baltimore, MD welterweight James "Keep 'Em Sleepin'" Stevenson was stopped in the third round against undefeated Ivan "The Volk" Golub of Brooklyn, NY by way of the Ukraine Friday night at the Buffalo Run Casino in Miami, OK.  The bout was televised on Showtime.

Stevenson gamely stayed in the bout in the first two rounds but was dropped in the third by a powerful Golub right hook. Stevenson got up and tried to continue but Golub's follow-up shots got the bout stopped at 2:51.  Stevenson is now 23-3, 16 KO's while Golub is now 13-0, 11 KO's.

Posted by Gary Digital Williams at 7:03 AM No comments:

James "Keep 'Em Sleepin'" Stevenson weighed in at 146 pounds for his eight-round nationally-televised (Showtime) contest against undefeated Ivan "The Volk" Golub tonight at the Buffalo Run Casino in Miami, OK.  Golub tipped the scales at 146 1/2 pounds.

Stevenson is a native of Baltimore, MD (23-2, 16 KO's) has not fought since May 14 when he scored a fifth-round TKO over Kevin Womack, Jr. in Timonium, MD.  Golub is from Brooklyn, NY by way of Gorlovka, Ukraine (12-0, 10 KO's) is coming off a second-round TKO over Ernesto Ortiz on July 21 in Mashantucket, CT.  Golub has fought in the Beltway as he scored a first-round knockout of Tyson Harrison at the Royal Farms Arena in Baltimore in November of 2014.

Posted by Gary Digital Williams at 6:08 AM No comments:

Reed (19-0, 11 KO's) last fought on June 11 and scored a sixth-round TKO over Abraham Cordero at the Theater at Madison Square Garden in New York City.  Herrera (29-5-1, 18 KO's) has lost his last two contests including a first-round TKO loss to Regis Prograis on March 25 in Miami, OK.

The bout is scheduled to be shown on GoFightLive.
Posted by Gary Digital Williams at 10:36 PM 1 comment:

Washington, DC welterweight Dusty Hernandez Harrison has scored the biggest win of his career to date with a 10-round unanimous decision over Thomas "Cornflake" La Manna of Millville, NJ today at the 2300 Arena in Philadelphia, PA.  Harrison earns the vacant USBA Welterweight title with the victory, shown on the CBS Sports Network.

Hernandez Harrison started slowly in the first couple of rounds as LaManna was able to use his height and shoot jabs. However, LaManna's punches had very little effect on Harrison, giving the DC native opportunities in the later rounds to land punishing shots of his own.

By the end of the bout, Hernandez Harrison was in complete control and went on to win by scores of 98-92 and 97-93 (twice).  The win should also put Hernandez Harrison in the top 15 in the world in the next IBF rankings.  Hernandez Harrison remains undefeated at 30-0-1, 16 KO's.  LaManna falls to 21-2, nine KO's.  Both LaManna's losses have come against Beltway Boxers.  LaManna's first loss came against Antoine Douglas in May of 2013 by sixth-round TKO.
Posted by Gary Digital Williams at 1:06 AM No comments:

Dusty Hernandez Harrison tipped the scales at 146.8 pounds for his bout against Thomas LaManna for the vacant USBA Welterweight title Thursday at the 2300 Arena in Philadelphia, PA.  LaManna weighed in at 146.1 pounds.

The bout will be the main event of the card that will be shown on the CBS Sports Network beginning at 10 PM ET.

Posted by Gary Digital Williams at 10:02 PM No comments:

There will be two big amateur boxing cards happening in the Beltway this coming week. 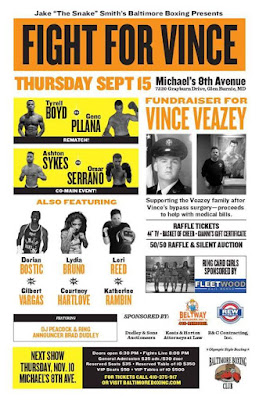 On Thursday, September 15, Baltimore Boxing is having a card at Michael's Eighth Avenue in Glen Burnie, MD. Michael's is located at 7220 Grayburn Drive in Glen Burnie. The card begins at 8 PM.

The card is called "Fight For Vince" as proceeds from the event will help pay the medical bills for Vince Veazey, who recently underwent bypass surgery.  Veazey is a noted Beltway Boxing supporter and the father of accomplished amateurs Joey and Sean Veazey.

The main event is a rematch between East Coast Middleweight champion Tyrell Boyd of Baltimore and Genc Pllana of Frederick.  The two boxers met in May and Pllana won a razor-thin decision.

Also on the card will be a boxer making her ring debut with a very special story.  Lori Reed of Glen Burnie will face an opponent to be named.  Reed was suffering with stage four cancer.   Reed had many physical and metal challenges, including the spreading of cancer to her lungs. Miraculously, she has recovered and the mother of five lives a normal life today. Reed says she is dedicating her bout to Vince Veazey. 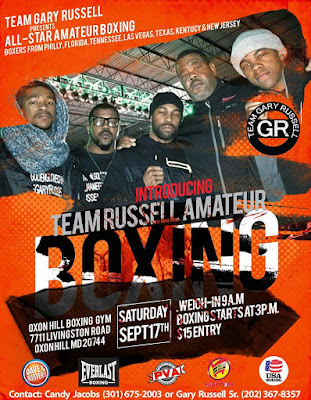 Then on Saturday, September 17, Team Gary Russell  -- The Russell Family will host a card at the Oxon Hill Boxing Gym located at 7711 Livingston Road in Oxon Hill, MD.  This card starts at 3 PM.

There are slated to be boxers from up and down the East Coast and as far away as Nevada, Tennessee and Texas.  Many of these boxers are Junior Olympic champions.

For more information on both these cards, please look at the flyers posted.

Posted by Gary Digital Williams at 9:43 AM No comments:

Roach jumped all over Macias as soon as the bell rang for the third round and dropped him with another left hook before the bout was stopped at seven seconds of the round.

Lamont Roach, Jr. tipped the scales at 131 pounds for his eight-round encounter against Mario Macias Rorozco Friday night at the Belasco Theater in Los Angeles, CA.  Rorozco weighed in at 133 pounds.

The bout may be shown online on www.ringtv.com.  The card is also scheduled to air on Estrella TV beginning at 10 PM ET.
Posted by Gary Digital Williams at 9:55 PM No comments: