Nelson, Hammer Give Final Words On Championship Bout In Detroit! 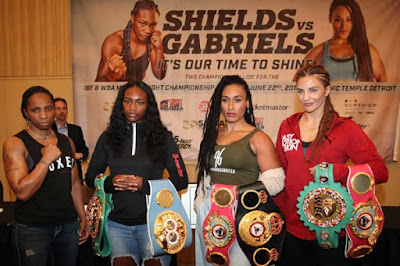 The four female combatants for the Friday, June 22nd middleweight championship doubleheader at the Masonic Temple in Detroit, MI had their final press conference on Wednesday. 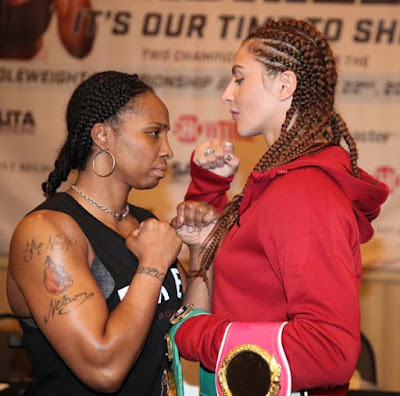 Here's what the Nelson and Hammer had to say.

Tori Nelson:  “I must say that I was very hurt to get my first loss but to have it against Claressa, I’m honored. She carries herself as a champion and in order to find out if you are the best, you have to fight the best. That’s what I did. I went up a weight class and I fought the best. She showed me she was.

“Styles make fights and it’s going to be interesting but we’re going to take this win home.”

Christina Hammer:  “I’m ready for this. I’m ready for you Tori. You want these two belts? You have to pass through me first. It’s time for me to shine and I’m ready.

“It was disappointing for me not to fight in January. I had some visa issues but now I have everything in order for me to make my debut. I’m so excited to finally step into the ring in the U.S.

“Right now, I’m only focused on my next fight and Tori is my target. Whatever Claressa does, I’m not focused on that. After the fight, I’m looking forward to fighting her but at the moment it’s only Hammer and Nelson.

“I feel that I’m in the best shape of my life right now. I prepared very well and I have my weight already. I ate very disciplined and clean. I spent a week in Ft. Lauderdale and now I’m in Detroit so I feel ready to go and looking forward to the fight.

“I think Shields is looking forward to fighting me and is not so focused on Gabriels like she should be. I am focused only on Nelson and that’s who I prepared to beat. After this fight, we can talk about Hanna or Shields.”

Craig Fladager, Nelson's Trainer: “They say that lightning doesn’t strike twice in one spot but we were fortunate enough to get a second opportunity on SHOWTIME. There’s no shame in losing to probably the best female fighter there’s ever been. Mad respect for Claressa. We like our chances against Christina Hammer, who we have a lot of respect for. Styles make fights. In this one, it’s kind of like Ali vs. Frazier. You have the tall, long Christina with the great jab and you have Tori at her best fighting weight. It’s going to be a really good contrast of styles and a great fight to watch.”

The televised portion of the card begins at 10 PM ET.  The Nelson-Hammer bout will be the second bout on the Showtime telecast.  One other note:  BATB has learned that "The Heavy Hitting Diva" Franchon Crews Dezurn of Baltimore, MD is no longer on the card.  No official reason was given.
Posted by Gary Digital Williams at 7:03 PM