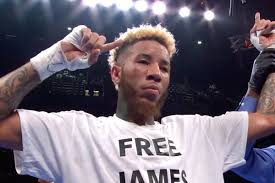 When Malik "Iceman" Hawkins steps into the ring on Friday, September 20th in Las Vegas, he will do so as a member of The Money Team.

Hawkins, who was named BATB's Prospect Of The Year in 2017, will make his Mayweather debut on a Mayweather Promotions card on September 20th when he takes on Al "The Machine Gun" Rivera of the Philippines (20-3, 18 KO's) in a 10-round bout.
Posted by Gary Digital Williams at 5:02 AM