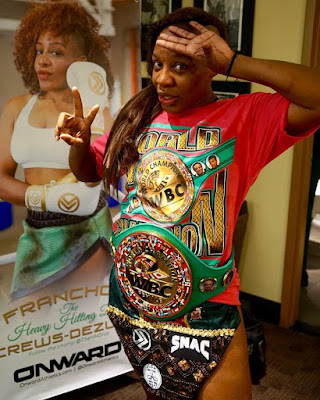 Congratulations to Baltimore, MD super middleweight "The Heavy Hitting Diva" Franchon Crews Dezurn who has captured a 10-round majority decision over Maricela "La Diva" Cornejo of Los Angeles, CA to win the vacant WBC Super Middleweight championship tonight at the Hard Rock Hotel and Casino in Las Vegas, NV.  The bout was televised by ESPN2.

Dezurn used her power and strong body shots to wear down Cornejo in the middle portion of the bout.  Cornejo could not overcome Dezurn's long and strong right hand and at times had to hold on to Dezurn to stop her onslaught.

Somehow, one judge, Patricia Morse Jarman saw the bout a draw, 95-95.  However, Jarman was overruled by judges Tim Cheatham and Dave Moretti who both scored the bout for Dezurn, 99-91.