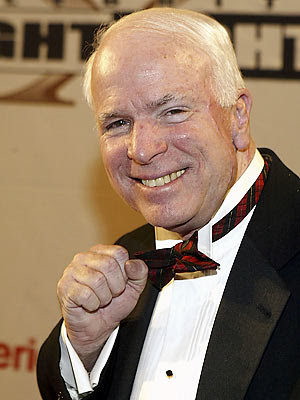 The boxing world lost a true friend with the passing Saturday of former Arizona Senator and Presidential candidate John McCain.  A boxer at the United States Naval Academy, Sen. McCain was a true leader in using his influence to help reform the sport.

McCain spearheaded a group of senators into enacting the Muhammad Ali Boxing Reform Act of 2000, a bill that seeked to protect the rights and welfare of pro boxers, aid state commissions with boxing oversight and increase sportsmanship and integrity in the sport.  The Act was signed into law by President Bill Clinton in January of 2000.

“He loved boxing and he wanted to make it better,” boxing promoter Lou DiBella told Kevin Iole of Yahoo Sports.  “Everything that went on, it frustrated the [expletive] out of him. Ali was one of his heroes. It’s no accident that it’s called ‘The Ali Act.’ He hated bad judging. He hated to see boxers exploited. At the time [the Ali Act was being debated], there were some scandals with the rating  organizations and that troubled him. He hated all the stuff that real intelligent, hard-core, caring fans hated. He hated it. He absolutely hated all of the nonsense. He wanted to see boxing be better and he had so many things on his plate, he couldn’t do what he really wanted.

“But he loved sports and he really had a passion for boxing. He loved the mentality the fighters had and he just loved to sit and watch a great fight.”   Sen. McCain befriended DiBella when the latter worked at HBO Sports and the two worked on the Ali Act and remained friends until Sen. McCain's passing at the age of 81 after a battle with brain cancer.

“He felt boxing had a lot of problems that needed to be fixed," Dibella said. "He got it completely. He got it more than just about anybody in terms of the bad judging and the conflicts of interest and the inadequate medicals and the toll that could take on the athletes physically and the economic exploitation that had been tolerated in the industry."

Sen. McCain was also passionate about Mixed Martial Arts, although many people first believed that he was trying to get rid of the sport in its earlier days as Sen. McCain once referred to the sport as "human cockfighting" and wanted to get the sport banned from television.  As it turned out, Sen. McCain's passion for regulation in MMA helped make the sport safer.  Sen. McCain also wanted to create a national boxing commission but that never got off the ground.

We all know that John McCain was a true American hero.  However, it is great to know that he tried very hard to be a hero to the sweet science of boxing as well.


Posted by Gary Digital Williams at 12:25 AM