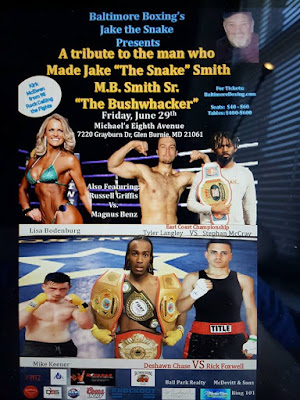 Baltimore Boxing will have an amateur boxing card on Friday, June 29th at Michael's Eighth Avenue in Glen Burnie, MD.  The card is the annual tribute to Murray B. "The Bushwacker" Smith, father of the promoter, Jake "The Snake" Smith.

Murray Smith was a fervent supporter of his son's exploits as Jake moved from boxer to trainer to gym owner and promoter.  Murray Smith passed away in July of 2013 at the age of 72 after a long battle with cancer.

The card is scheduled to feature a battle for the East Coast Light Heavyweight championship as Tyler Langer battles Stephan McCray.  Also, lightweight Magnus Benz takes on Russell Griffis.  There will also be a boxing appearance by fitness performer and former Marine Lisa Bodenburg.