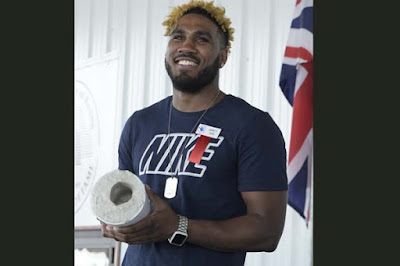 This has been a huge year for IBF/WBA/IBO Super Welterweight champion "Swift" Jarrett Hurd. Earlier this week, Hurd received another honor as he was the only current boxer to be invited to have his fist casted during the International Boxing Hall Of Fame's induction weekend in Canastota, NY.

Other Beltway Boxers who have had their fist casts recently include former world champions Hasim Rahman, Sr. and William Joppy.  Of course, hall of famer Mark "Too Sharp" Johnson got his fist casted in 2012 when he was inducted into the hall of fame.
Posted by Gary Digital Williams at 8:22 AM