January 14, 2017 will go down as an historic night in Beltway Boxing as two young men won incredible bouts in even more incredible fashion on national television at the Barclays Center in Brooklyn, NY.  One turned in what many have already called a "star-making" performance in winning his first world title while the other became an instant contender in a bout already in contention for Bout Of The Year and won a major regional title in the process. 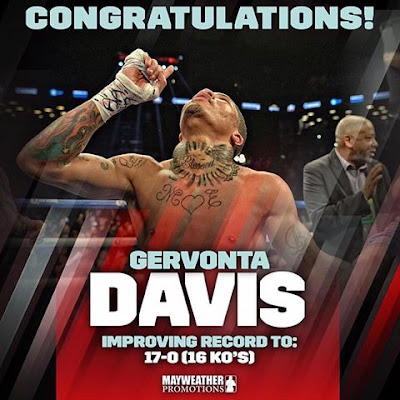 Baltimore, MD's Gervonta "Tank" Davis won the IBF Junior Lightweight title with an impressive seventh-round TKO over former champion Jose "Sniper" Pedraza of Cidra, Puerto Rico. Davis pressured Pedraza early getting inside the taller Pedraza's defenses.  Davis was able to land solid combinations and uppercuts. Davis showed incredible poise throughout the contest, even as Pedraza attempted to put on the pressure in the middle rounds.

Davis responded to Pedraza in the sixth round by landing what turned out to be a life-changing body shot with his left hand. Pedraza never truly recovered.  In the seventh, Davis finished his work with a crushing right hook to Pedraza's head.  Pedraza fell backwards to the canvas.  Pedraza beat referee Ricky Gonzalez's count but was in no shape to continue and the bout was stopped at 2:36.

At age 22, Davis is now the youngest current world champion from the United States and follows Joe Gans, Vincent Pettway and Hasim Rahman, Sr. as world champions from Baltimore.  Davis's record is now 17-0, 16 KO's.  Pedraza, who was making the third defense of his title, loses for the first time and he is now 22-1, 10 KO's. 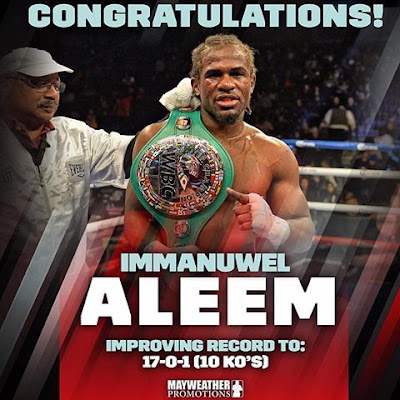 Earlier in the evening, Richmond, VA middleweight "The Chosen One" Immanuwel Aleem won the vacant WBC Silver Middleweight championship with an incredibly gutsy performance over Ievegen Khytrov of Brooklyn by way of the Ukraine in an early contender for Bout of the Year status.

Aleem got off to a great start in the contest, rocking the heavily-favored Khytrov with a vicious overhand right in the first round.  However, in the second, Aleem seemed to tire and Khytrov came back with hard shots of his own.  Aleem was not overwhelmed, however, and came back strong by knocking Khytrov down in the third round with a left hook. The equally-gutsy Khytrov came back in the same round and rocked Aleem late.

Aleem would knock Khytrov down again with brutal rights in the sixth round before finishing the job later in the round with a crushing left hook to the head that forced referee Eddie Claudio to stop the contest at 1:20 of the round.  Aleem, who trains in the Beltway, remains undefeated at 17-0-1, 10 KO's while Khytrov loses for the first time and he is now 14-1, 12 KO's.

One other note about this evening -- Even the main event of this card was shaped by a Beltway event.  The unification world super middleweight title bout between champions Badou Jack and James DeGale was created by a card that took place on April 30th at the DC Armory in Washington, DC.  WBC champ Jack fought Lucian Bute to a controversial draw (many, including this reporter, thought Jack won and Bute failed a post-fight doping test) while DeGale won a 12-round unanimous decision to keep his IBF title.

Posted by Gary Digital Williams at 7:43 AM

Big ups to Tank, way to represent the DMV!