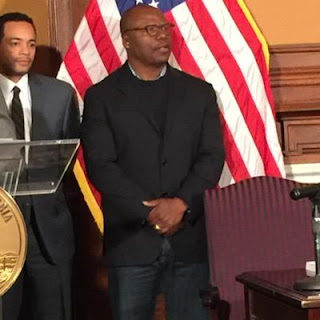 BATB has learned that District of Columbia Boxing and Wrestling Commission Chair Bryan "Scottie" Irving has resigned his post to take a new position within the DC Government.

Irving announced recently on his Facebook page that DC Mayor Muriel Bowser has appointed him to the board of directors of the DC Housing Finance Agency.  Irving also is the founder and president of the Blue Skye Development and Construction Firm in DC.

Irving served as chair of the DC Boxing and Wrestling Commission for six years.  During that time, the commission hosted 12 world title bouts including Lamont Peterson's title tilts against Amir Khan (when Peterson won the title), Kendall Holt and Dierry Jean as well as Bernard Hopkins against Beibut Shumenov.

No word yet on who Irving's successor will be.  The commission is in recess for the summer.
Posted by Gary Digital Williams at 9:57 AM