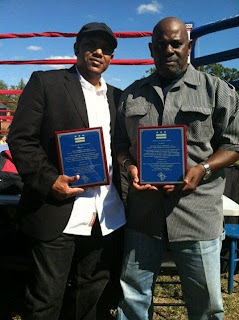 Mitchell's father, Charles Dave Mitchell, Jr., (pictured with Sharmba) was also honored for his service in the community. "Mitch," as he was known to many in the area, recently retired from the US Postal Service after a 46-year career.  After his retirement, Mitchell became an active member of the Prince George's County chapter of Concerned Black Men, an organization that mentors young black boys in the communities and schools.  Mitchell brought his son to Round One Gym in Hyattsville at the age of eight to begin what would eventually be his son's championship career.

Bell, the owner of Tony's Boxing and Fitness, was a patrol officer with the DC Metropolitan Police Department.  After retiring, Bell began work as the owner and operator of the Metropolitan Fitness and Safety Academy and has taught life skills and physical training for the American Community Partnership, a community-based construction apprenticeship school.  Bell also does training in law enforcement and police procedures for special police and security agencies.

Also honored at the event was Harold Lee Valentine, a community activist who helped get the MCI/Verizon Center and the Washington Convention Center to establish apprenticeship programs and hire residents of the Shaw neighborhood.

A posthumous honor went to Lionel Franklin Taylor, Sr., who helped establish Bando Kickboxing programs in the city.  Taylor was a Bando National Kickboxing champion from 1970-1972 and was the founder of the Amateur Kickboxing Federation where he produced numerous kickboxing and martial arts tournaments in the area.  Taylor was also the director of the Langley Recreation Center, now known as the Harry Thomas, Sr. Community Center.

Lionel , my friend, did a great job keeping the AKF a live however he was not the founder of the Amateur Kickboxing Federation. The Federation was formed at the Sugar Ray Leonard Gym with help from Maryland Parks and Planning in the early 80's

TRUE INDEED!!Robert Crawford started it and others took off and ran with it.

what is sharmba doing these days after his boxing career?