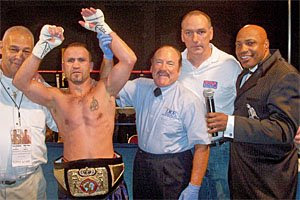 Congratulations to Smithsburg, MD's Dean "Pit Bull" White who captured the WBF USA Junior Welterweight title with an eight-round majority decision over Ryan Belasco last night at Dover Downs in Dover, DE. This report, as well as the photo above, comes from Fightnews.com's Rick Scharmberg:

The main event between Ryan Belasco and Dean White featured two natural counter punchers, and the result was a hard fought battle that was difficult to score.

Hailing from New Castle, Delaware, Belasco figured to be the hometown crowd favorite, but White comes from relatively close Frederick, Maryland, so the estimated crowd of 1,500 inside the Rollins Center equally cheered on both fighters.

There was little to choose between them in the opening two rounds. White presented an elusive target for Belasco with his southpaw stance. Belasco was able to land some lead right hands, while White opened with straight lefts to the head and body.

Belasco landed three lead right hands in the first minute of round two, in which there was a lot of grappling and holding. White continued to have some success with his straight left.

White handily took rounds three and four by eluding nearly everything that came his way. If Belasco got too close, he tied him up. White landed some body shots in round three, and a flashy overhand left in round four, along with two lefts downstairs.

Round five could have gone either way, and White landed some effective lefts to the body to win round six. Belasco came on strong in the final two rounds, landing some nice right hand leads to offset White’s left hand.

Smooth ring announcer Henry “Discombobulating” Jones kept the crowd – and the fighters – in suspense as he read the scores: 76-76, and then 80-72 and 79-73 in favor of White.

I was there and both fighters gained alot from the fight.Balesco came away with some valuable valuable ring experience which will make him much the better fighter next time out against such an experienced opponent and Dean left the fight with the respect he had lost in his last few fights.
He also put on a clinic on how to fight a fast handed fighter such as Balesco.And last He won a regional title that might open a few doors for him.Dean at this point only you can limit how far you want to go with this sport.
All the negative comments people have made in the past mean nothing
and you have proven that so much of this game is in a fighters head.
Really glad for you,your family,and your team,and a team you have.Johnny Johnson should be commended for all the hard work he puts in with you as well as all the other fighters in his gym.
And Doug and the rest of your team deserve accolades as well.Pittbull
stay focused and good things will come your way.

Good Job Dean! I always knew that you can do it. Your first trainer Mr.Jim Ed Jones always told me that you have championship talent and heart. I agreed with him each time. Keep on working hard champ!

Congrats Dean. You have the heart of a Lion!
Brad Dudley "The Auctioneer"

Congrats dean. You fought the perfect fight for you. I hope this win brings much more your way! Awsome fight! And that's right it is your belt and not mine! haha

Dean , congrats on your big win CHAMP ! Never let the dream die and continue to push forward with this endeavor. Like I have always told you,you are the only thing that keeps you from attaining what you want and it looks to me like your on the right track and I am proud to call you a friend.

Good job! Are you ready for that rematch with Ron Boyd. Let's make it happen.

Stand in line Boyd, you got your gift in Westminister.

Correct me if I'm wrong but didn't boyd lose his last fight by a first round tko??

Correct me if I'm wrong. Dean White is ducking a rematch with Ron Boyd. Dean White does not want to go through that punishment again. I understand Dean I don't blame you. Best wishes to you and your team.