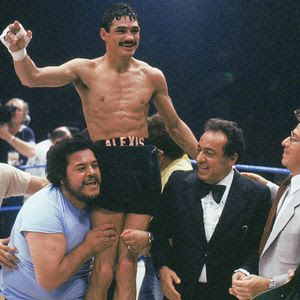 Arguello won his first world title in 1974 stopping Ruben Olivares in the 13th round for the WBA Featherweight crown. He then defeated Alfredo Escalera by a 13th round stoppage to win the WBC Super Featherweight title. Arguello's third title came in 1981 when he defeated Jim Watt for the WBC Lightweight title by 15-round decision.

But Arguello may be best known for his two epic losses to Aaron Pryor for Pryor's WBA Junior Welterweight crown in 1982 and 1983. Arguello was stopped in both bouts but they were fierce contests.

Arguello is in my top ten of all-time favorite boxers. As my buddy Jake Donovan of Boxing Scene.com put he was one of the all-time best and "a human instructional video of Boxing 101." He will truly be missed.
Posted by Gary Digital Williams at 10:34 AM

Wow..Definitely feel this loss. This is the boxer I most wanted to emulate when I was growing up.
I always admired Arguello's class and composure.

it is being reported that he committed suicide, gunshot wound through the heart. I can remember him fighting on cbs sports on saturdays back in the eighties;a true gentlemem of the sport. His two wars with aaron pryor were great fights. Alexis was a surgeon in the ring...

may god bless him.