The PBS News Hour recently did two nice profiles on local women's boxing. The first focuses on 2012 Olympic hopeful Tyreishia Douglas. The DC native who trains in Baltimore talks about her style and how she got into boxing.

Posted by Gary Digital Williams at 12:32 AM No comments: 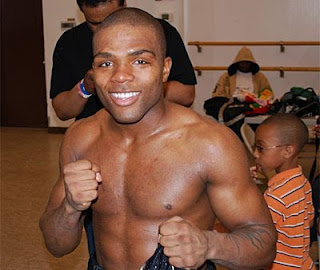 USBA Junior Welterweight champion Tim "Pitbull" Coleman of Baltimore has a big fight to start 2011. Coleman (18-1-1, five KO's) will face undefeated Vernon Paris of Detroit, MI (23-0, 14 KO's) in a 10-round bout on Saturday, January 29 at the Pontiac Silverdome in Pontiac, MI. The bout will be fought at a catchweight of 143 pounds and will be on the undercard of the Devon Alexander-Timothy Bradley title contest.

Coleman is coming off a solid third-round TKO over Patrick Lopez on a nationally-televised ShoBox bout on October 1 in Santa Ynez, CA. Paris last fought on November 12 in Royal Oak, MI and scored a fourth-round TKO over Ramon Guevara.

Coleman gave his thoughts on this bout in a recent press release.

On his victory over Lopez

"I know that Lopez’s people were very confident that he would beat me. Though I was defending my title I know I was being brought in to lose. I had other plans though and I made a big statement in front of a large television audience. There was a lot of talk about Lopez being a former Olympian but I didnt care about all that. He and his people must have been back in their dressing rooms a good 3-4 hours after the fight as they really took the loss hard.

On his opponent Vernon Paris


"We have actually sparred before. I can tell you he definitely is not a puncher. Like most midwest guys with a amateur background he can box. I know the midwest fighters get a lot of bad press but those with serious amateur backgrounds from there almost always have solid boxing skills. The boxing doesnt worry me though as I am not coming to box. I’m coming for knockouts from here on out. If Paris even thinks about disrepecting me at the pre-fight press conference or the weigh-in I will put him in his place quickly. Even in his hometown. He hasn’t fought anywhere near the competition that I have fought. Not even close. I will be the biggest name he has fought to date. I wouldn’t be surprised if I’m picked to be the underdog in this fight since I’m fighting in his backyard. After beating Lopez, Gary Shaw got options on my next few fights but I honestly don’t feel he sees me as one his fighters. I’m sure he will have more interest in me after I take care of Paris."


"A lot of people may not like the fact that I am so straight forward with my comments but that’s who I am. From here on out I’m coming to knock guys ASSES out!!!! Plain and simple. That’s what people want to see and that’s the only way I’m going to get a money fight. I’m giving myself a 3-4 year window to make major things happen in my career. Meaning money fights. I mean that’s what I am in this for. I see former fighters that are broke and worse than that in bad health from fighting. I refuse to end up that way. All I want right now is an opportunity to be in a major fight. I will take care of the rest once I get that."
Posted by Gary Digital Williams at 6:57 PM No comments:

My good friend Tammy Showalter of the Maryland Independent has a nice article during this season of giving. Recently, Old School Boxing Gym in Temple Hills, MD gave gifts to a number of youngsters who train at the gym. Many of these boxers would not have had a merry Christmas otherwise.

These gifts come during a rough stretch for the family of Old School's owner Buddy Harrison who recently lost his brother.

Here's the article -- another example of what all of the gyms in the Beltway Region do for the people they serve. A tremendous effort!

Former WBO Junior Welterweight champion DeMarcus "Chop Chop" Corley will continue his world travels into the new year. The next stop for Corley: Mendoza, Argentina where he will take on Argentinian Lucas Matthysee on January 21.

Matthysee (27-1, 25 KO's) is coming off a close 12-round split decision loss to Zab Judah for the vacant WBO Junior Welterweight title on November 6 in Newark, NJ.

Apparently, this is a bout that Matthysee's promoter -- Oscar De La Hoya -- wanted from the start after Matthysee's loss to Judah. "I would like to see him back in the ring in the not to distant future against a solid test like former world champion DeMarcus “Chop Chop” Corley,” De La Hoya said in a transcript of a phone conversation that appeared on Fightnews.com. The bout will be shown on Telefutura in the United States and HBO Plus in Latin America.
Posted by Gary Digital Williams at 7:33 AM No comments:

I hope that each and every one of you has a happy holiday season! Thanks again for all the support throughout this year! I will be working on the year-end awards and review immediately following Christmas so stay tuned. Thanks again!
Posted by Gary Digital Williams at 10:12 PM No comments:

"http://boxing.fanhouse.com/2010/12/12/seth-mitchell-nails-down-18th-straight-win-fifth-straight-ko/">
Posted by Gary Digital Williams at 9:11 PM No comments:

Sigmon, cheered on by a large throng of supporters from the Lynchburg, VA area, defeated Windsor Mill, MD's "Vicious" Julius Kennedy by 10-round unanimous decision. The extremely exciting bout was marred and momentarily stopped by a melee outside the ring involving fans from both camps. During the actual bout, Kennedy hit Sigmon with some hard shots but Sigmon seemed to walk through them. Sigmon looked more in control than ever before as he moved forward with purpose and landed good shots from awkward angles. Kennedy lost two points courtesy of referee Bill Clancy because of low blows and fought most of the bout with a right eye that was closing throughout the contest.


Byarm stopped a very game Winston Thorpe of Columbia, SC in the fifth round. The stoppage came during a tough battle of southpaws. Byarm almost had Thorpe down in the third round but Thorpe battled hard to stay in the contest. By the fifth round, however, Byarm's punches became too much and referee John Gradowski stopped the contest 51 seconds into the fifth.


In another feature bout, Tori "Sho Nuff" Nelson of Ashburn, VA won a six-round unanimous decision over Shelley Seivert of Severna Park, MD in a rematch of their draw in May.

Nelson seemed to land the more effective blows in the contest, however Seivert was coming forward more in an aggressive manner. Nelson's punches seemed to be the difference in the contest.


In other bouts on the card: Devin Butcher of Baltimore wins four-round unanimous decision over Stephen Franklin of Martinsburg, WVA. Butcher is 2-0 while Franklin is 1-2, one KO.

Baltimore heavyweights Lonnie Kornegay and Riley Brooks battled to a four-round draw. Kornegay is 0-3-1, Brooks is 0-1-1.


Here is the BATB Post-Fight Wrap-Up:

Gabcast! Boxing Along the Beltway #238 - Recap From Pikesville Armory!

"The Fight Doctor" Jerome Spears and I recap a raucous card from the Pikesville National Guard Armory in Pikesville, MD!

Posted by Gary Digital Williams at 2:04 AM 3 comments:

Scott Sigmon won a 10-round majority decision over Julius Kennedy.
Posted by Gary Digital Williams at 11:23 PM No comments:

Bout has resumed.
Posted by Gary Digital Williams at 10:35 PM No comments:

BULLETINS: Lamont Peterson and Victor Ortiz fought to 10-round Majority draw. Also, there was a melee during the Sigmon-Kennedy bout here in Pikesville.
Posted by Gary Digital Williams at 10:35 PM No comments:

Lamont Peterson and Seth "Mayhem" Mitchell both weighed in for their bouts tomorrow night at the Mandalay Bay Casino in Las Vegas.

Peterson hit the junior welterweight limit of 140 pounds for his 10-round televised (HBO) bout with Victor Ortiz, who weighed in at 141.

Mitchell came in at 243 for his eight-rounder against Taurus Sykes, who tipped the scales at 248.

Takoma Park, MD's Willis "The Prophet" Lockett and his opponent Tarvis Simms weighed in at 167 for their six-round bout at the Prudential Center in Newark, NJ.
Posted by Gary Digital Williams at 12:24 AM No comments:

Byarm Has New Opponent For December 11 Battle in Pikesville!

Undefeated DC heavyweight Maurice "Freight Train" Byarm has a new opponent for his battle on Saturday, December 11 at the Pikesville National Guard Armory in Pikesville, MD.

Byarm (9-0, six KO's) will now face fellow undefeated boxer Winston Thorpe of South Carolina (3-0-1, two KO's) in a six-round contest that will be for the East Coast Heavyweight title.

The headline bout will be the East Coast Middleweight title between "Vicious" Julius Kennedy of Windsor Mill, MD and Scott "Cujo" Sigmon of Bedford, VA.
Posted by Gary Digital Williams at 11:25 PM 3 comments:

Courtesy of DC Amateur Boxing, here are some results from the first day of Silver Gloves Competition at the Capitol Sports Complex in District Heights, MD. (Bouts with asterisks are Championship Bouts)

The 2010 Silver Gloves get underway on Saturday, December 4 at the Capitol Sports Complex (formerly known as Run N' Shoot), 6417 Marlboro Pike in District Heights, MD.. There will be a number of championship bouts on Day 1 of the competition.

In other tournament bouts:

The next round will be held on Saturday, December 18 at Tony's Gym, 2201 Shannon Place in Southeast DC.
Posted by Gary Digital Williams at 11:01 AM 1 comment:

Undefeated Brandywine, MD heavyweight Seth "Mayhem" Mitchell has been added to the card at the Mandalay Bay Casino in Las Vegas, NV -- the same card where Lamont Peterson will be facing Victor Ortiz.

Mitchell (19-0-1, 13 KO's) will take on veteran Taurus "The Bull" Sykes of Brooklyn, NY (25-6-1, seven KO's) in an eight-round contest on the undercard. Mitchell is coming off back-to-back first-round knockouts and stoppage victories in his last four bouts. Sykes lost his last three bouts to Hasim Rahman, Alexander Povetkin and Joseph Rabotte.
Posted by Gary Digital Williams at 2:29 PM No comments: